BOISE — ExtraMile Arena was packed out over two nights with over 20,000 people in attendance overflow crowds each night, with another 144,000 watching online.

Boise Harvest saw more than 1,700 people come down to the floor, committing their lives to Christ, during the two-night community event this weekend. More than 1,500 people also made a profession of faith via the live stream.

During the final invitation, the floor was so full that follow-up counselors had to climb up to the 3rd level of the venue to hand out more than 2,500 Bibles.

Over 100 local churches partnered over the course of 3 years, providing mobilization and volunteers, to plan this free event in Boise and the surrounding Treasure Valley area. The event was originally slated for 2020 and postponed due to the Covid pandemic.

“This event is three years in the making,” said Pastor Greg Laurie. “We originally set out to host Boise Harvest in 2020. But God made sure this happened at just the right time. The number of lives changed this weekend is reminiscent of all-out revival.”

The weekend event featured performances from Jeremy Camp, Chris Tomlin, Jordan Feliz, Andy Mineo and the Harvest Worship Band. Pastor Greg Laurie presented two convicting messages on what it takes to fulfill a soul and Christ’s solution to the problems of fear and the unknown.

“No matter what sin you have committed, God will forgive you,” Laurie said. “Maybe you came here to mock Christians tonight. Maybe you went out of your way to argue with believers. I used to be like that too. I never planned on becoming a Christian when I did.”

Greg then shared his story of how he came to know Jesus and how it changed his life forever.

At the end of each night, Laurie invited attendees to make a public profession of faith as The Harvest Worship Band played. Thousands of people rose from their seats and made their way toward the stage as they committed their lives to Jesus. They were met by local pastors and volunteers, who were able to lead them in prayer and invite them to a local church community.

Since 1990, Harvest Crusades have been held in the United States, Canada, New Zealand and Australia. More than 6.5 million people have attended Laurie’s crusades in person. More than 600,000 people have made professions of faith in Christ through Harvest outreaches.

Laurie is releasing three films in the next year. “Fame,” an evangelistic film featuring interviews with Alice Cooper and Darryl Strawberry, will release in 2022. “Johnny Cash: The Redemption of an American Icon,” based on Greg’s biography of the same title, is set for release in Fall 2022. And “Jesus Revolution,” a feature film starring Kelsey Grammer, Jonathan Roumie and Joel Courtney, depicting the spiritual revival of the 1960s and ‘70s, will land in theaters Spring of 2023.

“So, what is the meaning of life?” Laurie asked. “It is to know there is a God in Heaven who loves you and has a plan for your life. Why are you here on this earth? To walk with God in a friendship, a relationship, with hope for this life and the afterlife.”

‘You’re noticed by God. You’re loved by God. And your life can have significance’: SoCal Harvest celebrates first in-person crusade post-pandemic with over 6,000 professions of faith 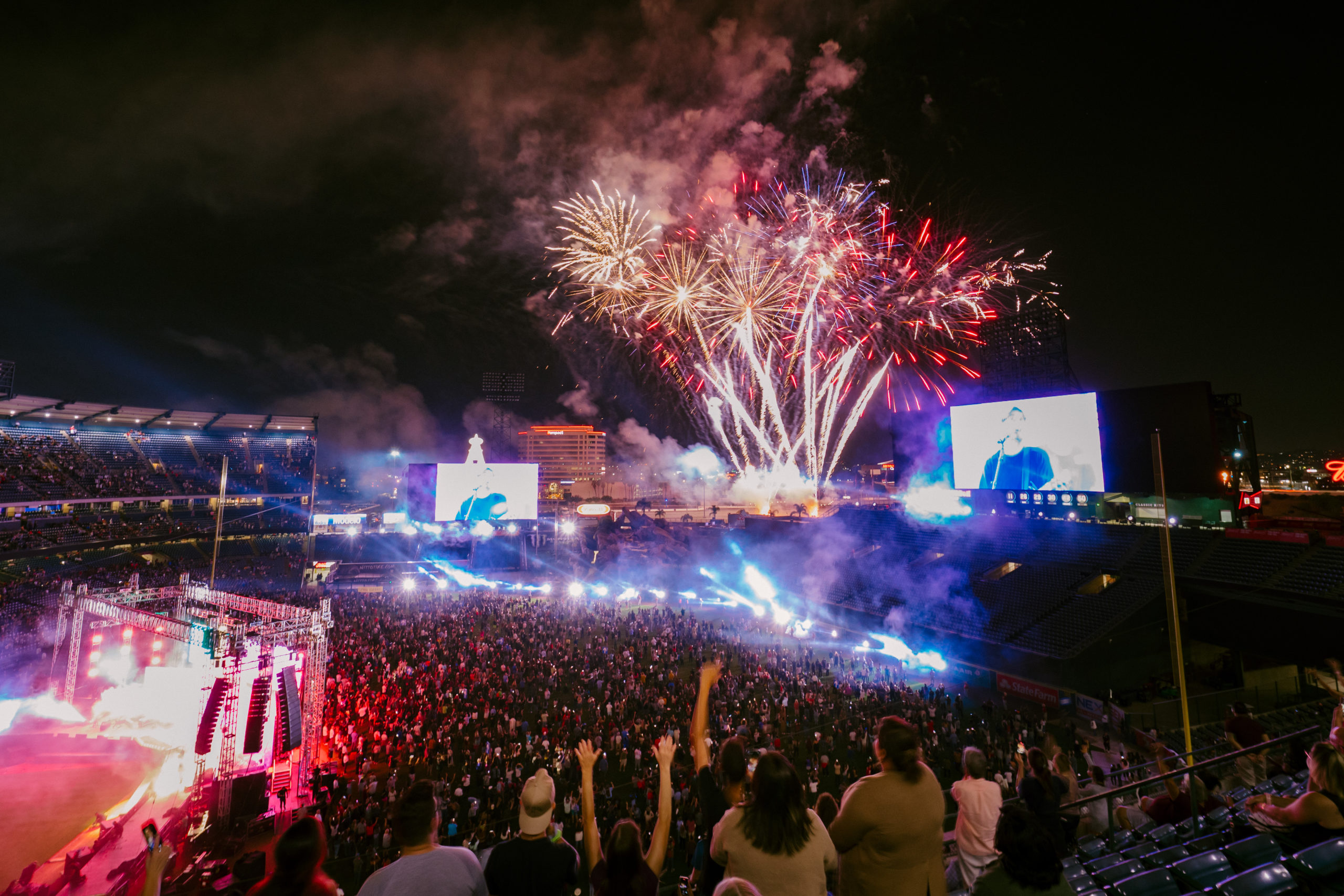 ANAHEIM, Calif. — After taking a gap year due to the COVID-19 pandemic, SoCal Harvest returned to Angel Stadium on Sunday, Oct. 3 with more than 6,000 people making professions of faith.

In lieu of a traditional crusade, Harvest released its cinematic crusade film A Rush of Hope in 2020, which reached over 4 million viewers and saw over 20,000 people respond to the gospel message.

Now, a year later, the outreach event drew over 40,000 people to Angel Stadium and 200,000 online, where they enjoyed performances by Billboard Music Award, Grammy Award and Dove Award-winning artists, For KING & COUNTRY and Phil Wickham, and a gospel presentation by Harvest founder and Pastor Greg Laurie.

More than 600 radio outlets across the nation partnered with Harvest to broadcast the event, and 100 pages across Facebook shared the video livestream. In addition, 170 Southern California churches participated in this year’s event, providing mobilization and volunteers.

The evening began with a performance by For KING & COUNTRY and an introduction from Pastor Greg Laurie. Laurie received a warm applause from the crowd after announcing that the footage from the night would be featured in his upcoming film FAME, produced by the Erwin Brothers. Throughout the night, large screens displayed clips from the film, including interviews with rock icon Alice Cooper and former MLB player Darryl Strawberry.

After performances from Phil Wickham and For KING & COUNTRY, Greg Laurie presented a convicting message on the empty promises of fame, emphasizing the fulfillment that can only come from being known by God. 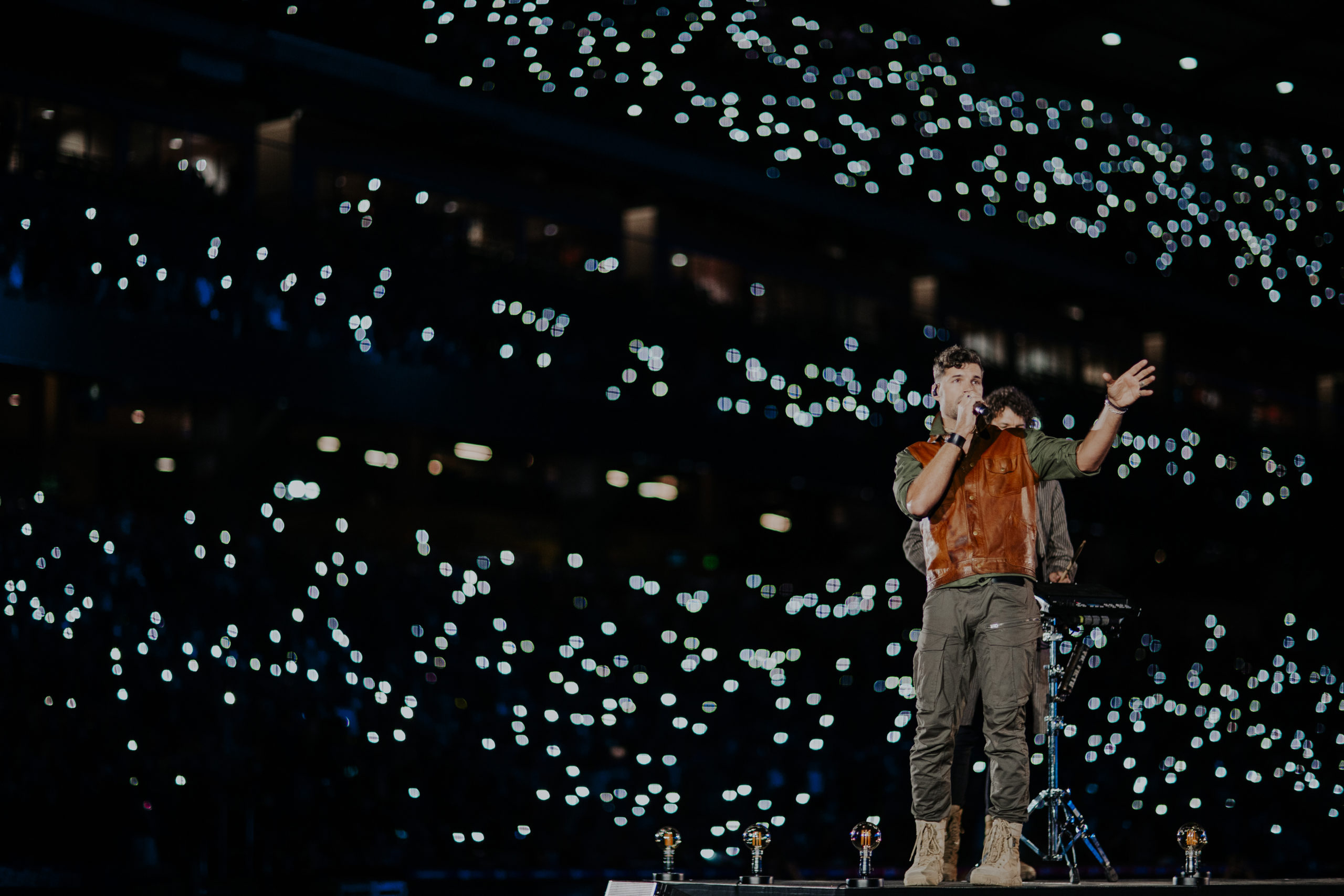 “The reason so many seek fame is because deep down inside, we have a desire to make our mark and distinguish ourselves,” Laurie said. “We want our life to count for something. We are seeking significance. The answer is not in fame or more followers on your social media account. The answer is in knowing and following Jesus.”

Pastor Greg Laurie took a moment to pay tribute to Marine Lance Cpl. Kareem Nikoui, one of the 13 soldiers who were killed in a terror attack in Afghanistan on Aug 26, 2021. Nikoui attended a Harvest Crusade in 2016, where he and his family gave their lives to Christ. His funeral was held at Harvest Riverside and officiated by Pastor Greg Laurie.

“Kareem went to Heaven because he put his faith in Christ,” said Laurie. “And that’s the hope that the Christian has.”

At the end of the night, fireworks rang out after Laurie invited attendees to make a public profession of faith and Phil Wickham played his hit song “This Is Amazing Grace.” Thousands of people rose from their seats and made their way toward the stage as they committed their lives to Jesus. 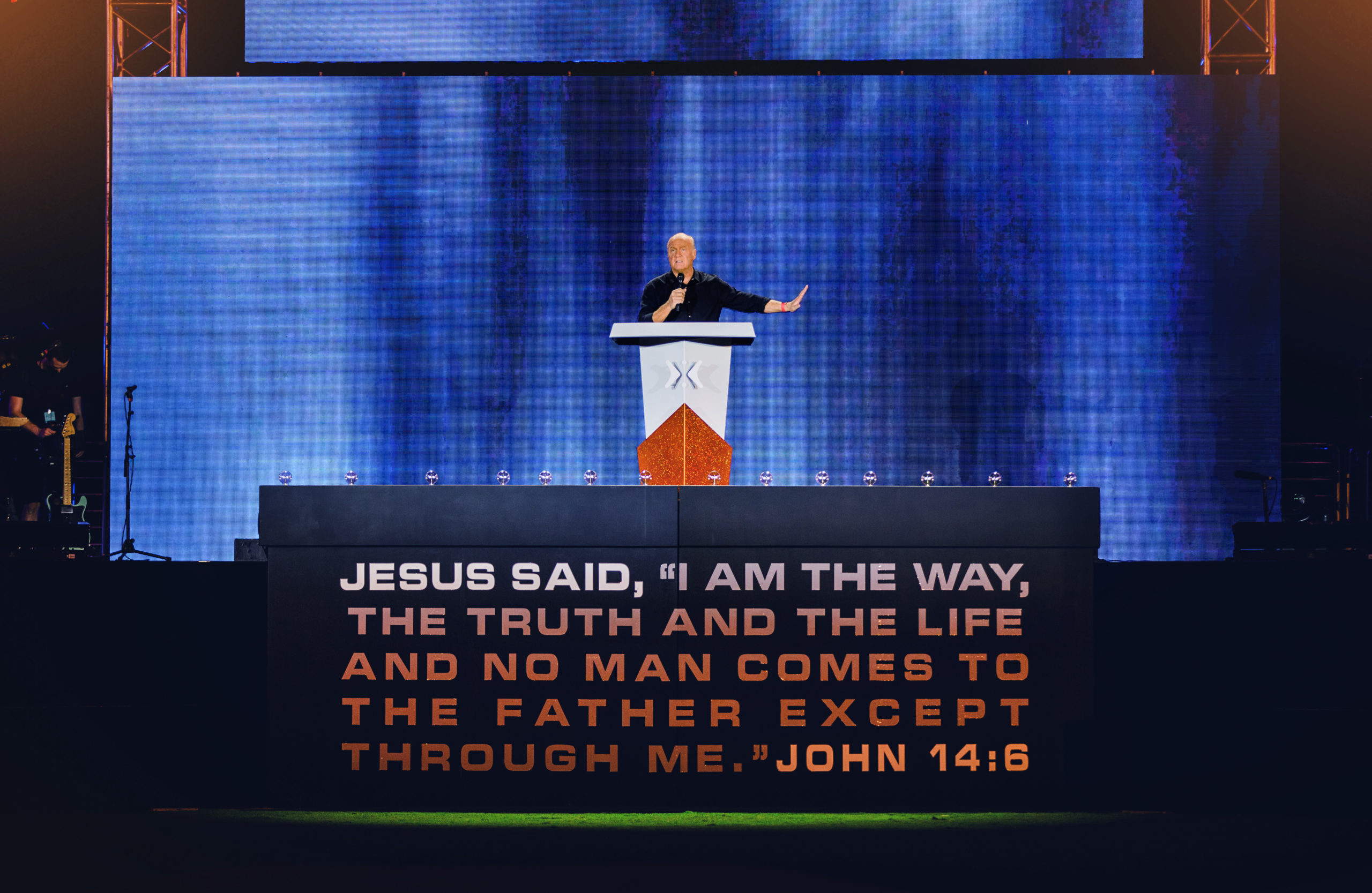 “You’re noticed by God. You’re loved by God. And your life can have significance,” said Greg Laurie. “No matter what sin you have committed, God will forgive you tonight if you will ask for his forgiveness.”

Since 1990, Harvest Crusades have been held in the United States, Canada, New Zealand and Australia. More than 8 million people have attended Laurie’s crusades in person, and millions more have participated online. More than 700,000 people have made professions of faith in Christ through Harvest outreaches.

In 2022, Laurie is planning two additional live, in-person crusade events: The Boise Harvest in Boise, Idaho and a new event called “Jesus Revolution” at SoFi Stadium in Los Angeles. Moreover in 2022, Laurie is planning to release two films: Fame, an evangelistic film featuring interviews with Alice Cooper and Darryl Strawberry, and Jesus Revolution, a feature film depicting the spiritual revival of the 1960s and ‘70s in the U.S.

“There is no good thing you can do to have eternal life,” Laurie said. “Heaven is not for good people. Heaven is for forgiven people.”

Greg Laurie is the pastor and founder of the Harvest churches in California and Hawaii and of Harvest Crusades. He is an evangelist, best-selling author and movie producer. His new book “Billy Graham: The Man I Knew" was released in 2021.

RIVERSIDE, Calif. – Greg Laurie, founder and lead pastor of Harvest Church and Harvest Crusades, will return to Angel Stadium in Anaheim, California on Sunday, October 3, 2021, for the SoCal Harvest—the ministry’s first stadium outreach event in over a year.

Started in 1990 by Greg Laurie and Chuck Smith, pastor and founder of Calvary Chapel, SoCal Harvest is an annual crusade held in southern California. In years past, SoCal Harvest has packed the stadium in Anaheim, but as a result of gathering restrictions in 2020, the in-person event was replaced last year by the one-of-a-kind cinematic crusade “A Rush of Hope,” which reached over 4 million people.

SoCal Harvest 2021 will feature worship by Christian music artists Phil Wickham and for KING & COUNTRY, as well as a special message from Pastor Greg Laurie.

“Because of the pandemic last year, we had the incredible opportunity to create and release ‘A Rush of Hope,’ which led to more than 17,000 people making professions of faith,” said Laurie. “And we are thrilled that we are able to be back together this year in person for another life-changing event.”

A live-stream option will be available for those who are not comfortable or able to attend in person. For those who attend in-person, the event will follow protocols currently being employed in Angel Stadium.

"I've never in my entire life and ministry encountered more hearts awakened to the gospel," said Laurie. "I believe in the wake of the global pandemic we might be on the precipice of a great, global revival. I believe we'll see more energy in Angel Stadium on October 3 than we ever have before, and this event will be the first in a series of major events and initiatives that I believe God will use to reach more people in the next couple of years than in the previous decade. We are putting everything we have into reaching everyone we can. We all know now how short life can be."

Click here to stay up to date on the latest information about SoCal Harvest. Additional musical guests, details, and updates will be announced.

Greg Laurie Greg Laurie is the pastor and founder of the Harvest churches in California and Hawaii and of Harvest Crusades. He is an evangelist, best-selling author, and movie producer. His new book “Billy Graham: The Man I Knew" was released in 2021.