The 2018 SoCal Harvest is free & open to the public.
Angel Stadium charges $15 for car parking and $30 for bus parking.

The 2018 SoCal Harvest will be broadcast live over the internet & archived, & may be accessed at www.harvestcrusades.org.

Each night of the event will be interpreted in Spanish.  Signing for the deaf will be provided.

Some 6,500 volunteers will serve in a variety of capacities during the 2018 SoCal Harvest, from stage set-up to ushers to follow-up workers.

Founded in 1990 by Greg Laurie, pastor of Harvest Christian Fellowship® in Riverside and Irvine, Calif., and Maui, Hawaii, the Harvest Crusade events have been attended by more than 8.9 million people worldwide at stadium and arena events and via live webcast, live television, and live social media views.  Harvest Crusades with Greg Laurie are not affiliated with any individual church or denomination.  Instead, they are supported financially by hundreds of churches of various denominations and by thousands of individuals around the country.

Harvest Crusades®, 1990
Since 1990, Laurie’s Harvest Crusade events have been attended by more than 8.9 million people worldwide, both in-person in stadiums & arenas across the U.S., Canada, Australia & New Zealand, and via live webcast, live television, and live social media views.

In 2012, Harvest simulcast its Southern California Harvest Crusade to thousands of locations across the country for a coast-to-coast evangelistic outreach called Harvest America. Since that time, Harvest America has become an annual event that now reaches audiences around the world through internet and satellite technology.  The 2018 Harvest America event, held at AT&T Stadium in Dallas, was live streamed to 6,630 remote host locations around the world and drew tens of thousands of participants.

The A New Beginning radio program is broadcast on more than 1,000 radio outlets around the world, and is one of the most popular Christian podcast downloads on Apple’s iTunes store.  Laurie is also featured in a weekly television program called GregLaurie.tv (www.GregLaurie.tv), which is available on-demand online and airs weekly on more than 20 television outlets, including the Trinity Broadcasting Network and American Forces Network TV.

Greg Laurie has authored more than 70 books, including the recently released title, Jesus Revolution.  Laurie released Steve McQueen: Salvation of an American Icon in 2017, and its accompanying film was developed in partnership with Erwin Brothers Entertainment—producers of I Can Only Imagine—and was shown in hundreds of theaters across the country as a Fathom event.

Harvest Crusades | The Story of Harvest

A “Lost Boy” Finds His Way

When Greg Laurie attended local baseball games as a kid in Southern California, he had no idea he would later preach to the masses from second base at Angel Stadium of Anaheim. Through God’s intervention, Laurie overcame a troubled childhood and drug-laced adolescence to become a passionate evangelist and preacher, founding Harvest Christian Fellowship, which now has locations in Riverside and Irvine, Calif., and Maui, Hawaii, and has become one of the largest churches in the U.S.

“Jesus People” and Beyond

At age 17, Laurie became a Christian and gave up drugs and alcohol, joining the Jesus People—hippies who rejected substance abuse for a relationship with Christ. He matured in his faith and eventually became the pastor of Harvest Christian Fellowship in Riverside, Calif., and was eager to present the gospel of Jesus Christ to Southern Californians in a non-traditional way. In 1990, with little more than personal experience, deep conviction, and great vision, the Harvest Crusades® were born as Laurie, along with Chuck Smith, pastor of Calvary Chapel Costa Mesa, developed a simple strategy for presenting Christ’s gospel message in a contemporary format. A plan evolved for a casual evening of high energy music, authentic worship, and a clear presentation of a biblical message.

At a time when many in the U.S. were questioning the effectiveness and the future of modern crusade evangelism, Laurie and Smith believed that large-scale evangelistic outreach had great potential for a new generation. The format would be contemporary and would appeal particularly to youth.

“I strongly believe that we’ve got to communicate the gospel so that it can be understood by secular-minded people,” writes Laurie in his autobiography Lost Boy. “Otherwise we just end up talking to ourselves.”  Remarkably, more than 90,000 people attended the first Harvest Crusade in 1990, featuring Greg Laurie as the evangelist.

Now in its 29th year of evangelistic outreach, the Harvest Crusades continue to appeal to audiences of all ages, and have been hosted by churches across the country and around the world at venues like Angel Stadium of Anaheim, Dodger Stadium, Madison Square Garden, and AT&T Stadium in Dallas.  Through the years, Harvest has featured top name Christian musicians and special guests like Bethany Hamilton and Louis Zamperini, as well as a nightly message from Laurie, who has spoken at every Harvest Crusade event since 1990.

In 2012, Harvest simulcast its Southern California Harvest Crusade to thousands of locations across the country for a coast-to-coast evangelistic outreach called Harvest America. Since that time, Harvest America has become an annual event that now reaches hundreds of thousand around the world through internet and satellite technology.

Since 1990, Laurie’s Harvest Crusade events have been attended by more than 8.9 million people worldwide, both in-person in stadiums & arenas across the U.S., Canada, Australia, and via live internet broadcasts. But the greatest impact of the Harvest Crusades to date can be measured by the 509,897 people who have professed faith in Jesus Christ as a result of the gospel message presented by Greg Laurie at each event.

Harvest: Where Hearts and Communities Flourish

Harvest Crusades—also known as Harvest with Greg Laurie events—are faith-building, soul-stirring gatherings that not only change lives, but unite entire communities. Hosted by hundreds of local churches in cities around the world, the Harvest Crusades bring diverse communities of faith together to share the love of God with those around them. Like any large event, Harvest takes significant planning, collaboration and cooperation, as well as good old-fashioned hard work. But when the work is done, lives flourish spiritually.

“Jesus told us there is great joy in Heaven when a person trusts in Him. So there certainly should be joy in having a role in introducing that person to Christ,” says Greg Laurie, founder of Harvest Crusades.

SOME PREPARE: Months in advance, hundreds of local churches from various denominations unite to form a hosting committee to invite Harvest Crusades to their city and organize local outreach.

SOME SEED: One million invitations to the 2017 SoCal Harvest will be distributed, many of them hand-delivered by local students from Greg Laurie’s church in Southern California, Harvest Christian Fellowship.

SOME CULTIVATE: 6,500 people will volunteer at the 2017 SoCal Harvest. Whether they are setting up the stage, handing out programs, or serving as follow-up workers, each and every volunteer is invested in the effort. After the outreach, local churches follow up with attendees who made the decision to commit their lives to Christ and invite them into community.

ALL SHARE THE HARVEST: In one weekend, thousands of hearts and lives can be transformed in a community, as well as around the globe.

ACROSS AMERICA: Hundreds of thousands of people across the country have participated in Harvest’s evangelism campaign called Harvest America, where the message of the Gospel presented at Harvest Crusades events is taken to multiple sites across the U.S. and around the world via satellite and a live streaming webcast.  The 2017 Harvest America event, held at the University of Phoenix Stadium in Arizona, was live streamed to more than 3,700 remote host locations around the world and drew a combined audience of more than 945,000 participants.

Since 1990, Harvest Crusade events have been attended by more than 7.8 million people worldwide, both in-person in stadiums & arenas and via live Internet broadcasts.  Some 496,573 people have committed their lives to Christ as a result of the message of hope presented by Greg Laurie.

EDITOR’S NOTE: 2017 SoCal Harvest staff and volunteers are available for interviews. Please contact Laura McGowan at (847) 347-5206 or at [email protected] for more information.

Since its inception in 1990, Harvest Crusades with Greg Laurie has drawn more than 5.9 million people to local stadiums and arenas in communities around the world to hear a life-changing message of hope in Christ, but it has also shared that same message with millions more through virtually every form of media.  While tens of thousands flock to Angel Stadium of Anaheim for the 2018 SoCal Harvest, Aug. 17 – 19, audiences around the world will participate in the outreach via live radio broadcasts, live television programs, live and archived Internet broadcasts, video simulcasts, digital media, podcasts and live blog updates.  Since 1997, nearly 3 million people have participated in live Harvest Crusade events via the Internet alone. 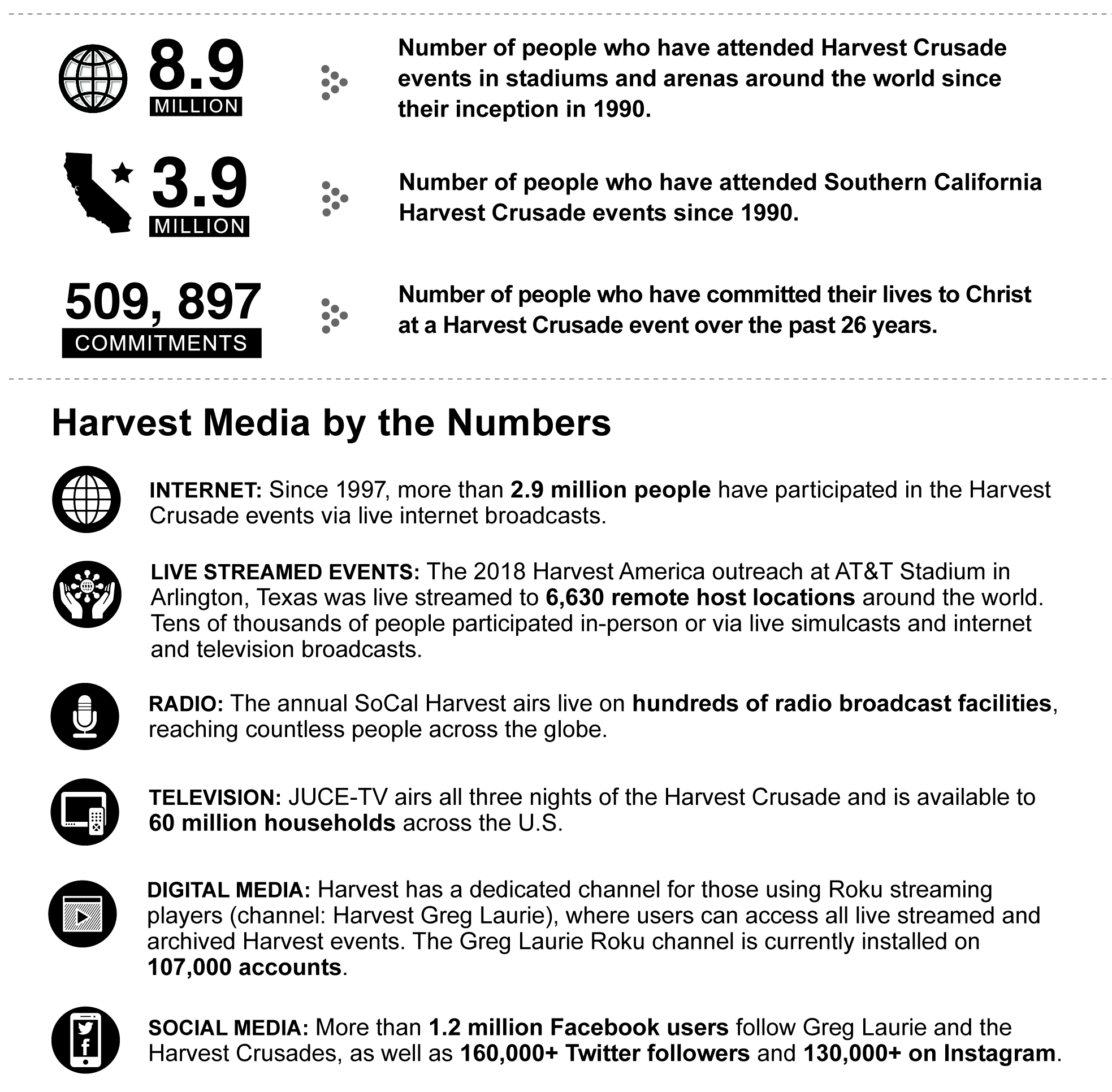 EDITOR’S NOTE: 2018 SoCal Harvest staff and volunteers are available for interviews. Please contact Laura McGowan at (847) 347-5206 or at [email protected] for more information.